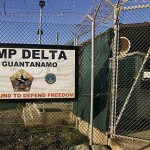 David is joined by former CNN colleague Phil Hirschkorn to talk about the prisoners of Guantanamo Bay and the complicated process of charging them for crimes and processing them in the legal system. In January 2002, prisoners in the “war on terror” began arriving at GTMO and about 180 of these prisoners remain there today. Many of them have never been charged with a crime despite their long imprisonment and currently there is no definitive timeframe for charging and trying these prisoners.