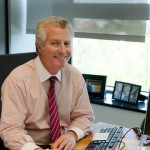 David chats with former Radio Free Europe/Radio Liberty President and CEO Steve Korn about his time with the organization in Prague. Originally formed during the Cold War as an anti-communist news source, Radio Free Europe still serves many of the countries in the so-called “Iron Curtain” but also serves more volatile countries like Iran and Afghanistan. Although his tenure only lasted around a year and a half, Korn oversaw the rapidly changing broadcast radio landscape and dealt with often less than hospitable governments.