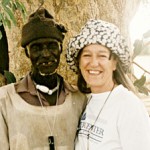 David talks to Kelly Callahan, the Assistant Director of Program Support for the Carter Center Health Programs, talks about her work with the Carter Center in eradicating Guinea Worm Disease. Though the disease is largely unknown to most people, it affected more than 2.5 million people a year at its peak. Now, mostly thanks to the efforts of the Carter Center, there were less than 550 cases reported worldwide.