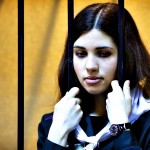 David is joined by Russian-American journalist Masha Gessen about Russia and its persecution of the LGBT community which came to a boiling point in 2012 with the artist collective Pussy Riot. As a mother and a member of the LGBT community, Gessen made the decision to leave Russia after the country’s government outlawed anything they consider “gay propaganda” and also began cracking down on LGBT parents.