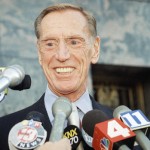 David chats with former colleague Allan Dodds Frank about their work on the story of Charles Keating who was best known for his role in the savings and loan scandal of the late 1980s. Since the scandal, Dodds Frank has been honored for his commitment to exposing the story that eventually led to a 10-year prison sentence for Keating. Keating passed away on March 31, 2014 at age 90.