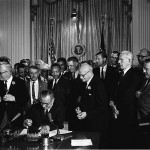 David is joined the Vanity Fair editor Todd Purdum to chat about his new book An Idea Whose Time Has Come. This book celebrates the 50-year anniversary of the Civil Rights Act of 1964. This landmark bill was first introduced in 1963 and took every bit of political prowess from Lyndon Johnson in 1964 to finally get a clean bill to pass the house and senate.