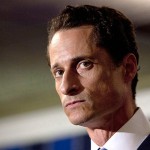 David chats with NY Times reporter David Halpfinger about the political comeback attempt of Anthony Weiner. In 2011, Weiner resigned from Congress after being accused by a number of his Twitter followers of sending inappropriate pictures. Having endured the embarrassment and creative headlines from his ordeal, Weiner is now hoping to revive his political career by running for Mayor of New York City in 2013. Halpfinger describes his time spent with candidate Weiner and his feelings on this political comeback.